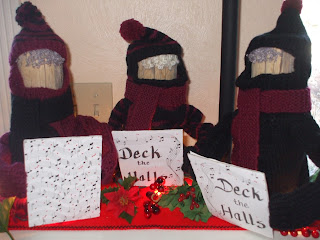 After writing all those daily Thanksgiving posts, it seems like it has been a long time since I posted anything.  I have decorated for Christmas and thought I'd share a few things.  I am a fan of decorating on the cheap.  Some years ago, I saw some carolers in a catalog.  I don't remember which one now.  They were really cute.  And really expensive.  At least way more than I wanted to spend.  I decided to make them myself instead.

There were some fence post logs laying around the back of the house when we moved here so I cut three pieces in the length I wanted for the carolers and then I got out some yarn I had on hand and the knitting needles and went to work.  I'm not very good at making up my own designs so I based the sweater and hats on baby patterns I had and just cut them down to a smaller size. 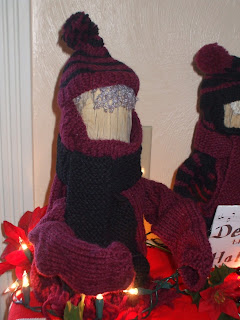 The sweater goes up over the back of the "head" and the hat and scarf hold it in place.  I had some fun textured yarn that I glued on for hair. The carolers have no faces.  The sweater is long enough to cover the entire wood post and the sleeves go all the way down to their music books so there are no hands.  The arms were fashioned out of a hanger.  The music is  cardboard covered in scrapbook paper with music notes on it.  The wire from their arms just sticks in the holes on the side of the cardboard.  Does that make sense?  I didn't glue them in so I can take the music off for storage.     I did all the sweaters, hats and scarves in coordinating colors but not matching  patterns.  This whole project cost me the price of the paper on their music.  I have never been quite satisfied with the music so maybe someday I'll redo them but for now they stand as is. 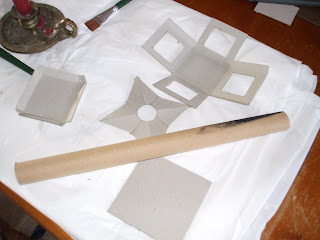 Every year when we put the carolers out, I wish I had a street lamp to put next to them.  I've looked for years for something but most of them were not tall enough or were more than I wanted to spend (as usual).  This year it finally dawned on me how I could make my own street lamp when I finished something rolled on a very heavy, sturdy core. I messed around with paper to figure out the design I needed and then cut the chipboard like stuff that comes in the package of computer stationary to hold it stiff. I painted all the pieces black. 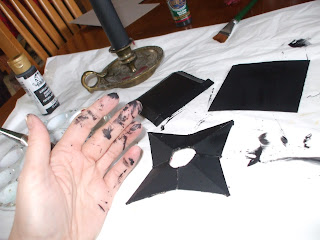 Does everybody get as messy as I do when painting? I thought I was really clever to put the core thingy over a candle to hold it upright so I could paint the entire thing without touching it. 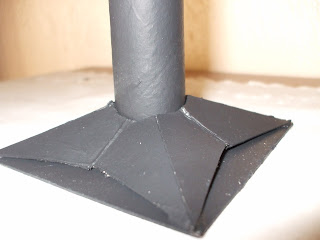 I put the core on the square base and the the star shaped thing over it to give it a prettier base. I'm not really sure why the paint looks scraped up in some of these pictures... Couldn't possibly be user error with the camera, could it? 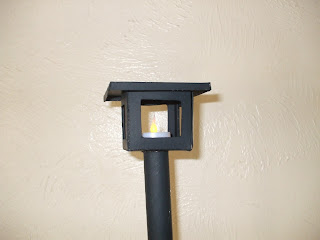 And then built the box for the top with windows. 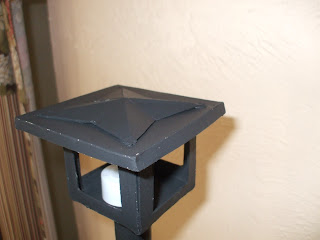 In the end I decided that the top needed something so I gave it a little star dome too. 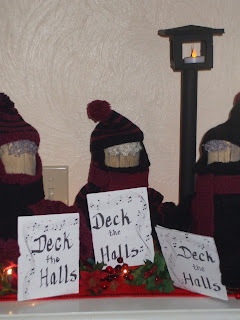 I put a battery operated candle inside the windows and there I've got a street lamp.

Email ThisBlogThis!Share to TwitterShare to FacebookShare to Pinterest
Labels: Christmas

You are so talented and so creative! I tried to copy the stocking that grandma made me when I was a baby for Freddy and Henrik this year and both stockings look nothing like Grandma's and nothing like each other....

Your knitting skills amaze me and I love the whole idea of the carolers with the street lamp and everything!

You are one clever momma!!!