I have a good friend who 11 months of the year has a lovely home beautifully decorated by her good taste.  But during the Christmas season all rationale seems to leave her and her desired decorating style goes

I don't know what happens to her but suddenly she likes bright, bold colors and the more glittery the better. Her husband does not share her affection for a glittery Christmas so each year I try to accommodate her glitter love by giving her some kind of glitter either in the form of her actual gift or something decorative on the package that she can then use to decorate the tree and so forth.  I know I'm enabling her but I find it rather amusing.

Years ago I declared our house a glitter-free zone.  I hate glitter.  I don't particularly  like the look of it but much worse than that is the mess.  Once glitter comes out of its bottle it cannot be contained!  So no glitter art projects for my kids.

I actually own glitter.  I'm sure I didn't buy it.  Someone must have given it to me along the way and I was raised by people who believe wasting is a sin so rather than toss it, it has, for years, sat in a drawer with other crafting supplies but never seen the light of day in my house. Some years ago, some crafty person made us a homemade Christmas ornament made of glitter covered string. I don't think it was made by my kids at school. I know it wasn't made in my house.  But I can't remember exactly where that one came from.  I dread when that one comes out of its box.  I know that there will be glitter in the carpet that will probably never all come up.  Then after some time, someone again made us a glittery ornament.  It gets stored in the same little box as the other in an effort to contain the glitter.  We have a smaller tree now than we used to and own far more ornaments than it will practically hold so we pick and choose what will go on the tree.  I didn't even offer those as an option this year.  Maybe not last year either. 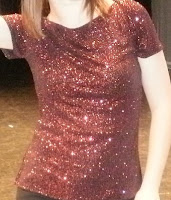 My youngest daughter was in a singing group in high school and the outfit she had to wear had a red glittery top.  So glitter came out of its hiding every time she had a performance and they were fairly frequent.  We had just taken the carpet off of our stairs and painted them instead. I still have red glitter stuck to the paint on the stairs.  I’ve given up trying to sweep and clean it off.  Our stairs just have red glitter sprinkled on the dark green paint forever I guess. 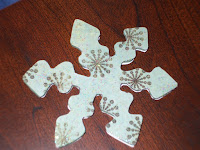 In my craft supplies I do have glitter paint.  I didn’t buy it either but I have found it useful.  It doesn’t go everywhere like regular glitter does and so on the rare occasion that I need some sparkle on a project I pull it out.  I recently covered some snowflake shaped wood with scrapbook paper and although it was cute I decided that snowflakes need a little sparkle.  Since then I have been crocheting snowflakes to stiffen and then make a little garland out of for winter decorating.  Last night I began the process of applying the stiffener.  It really is just Elmer’s glue mixed with water. In the past I submerged the flake entirely which was really messy but recently read on someone’s blog that they painted the glue on so that was my plan this time. 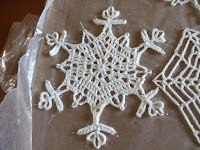 To do this, you need a cardboard box covered in wax paper and straight pins to hold the shape of the snowflake while it is drying.  I began the pinning and painted the first one.  That seemed to go well and wasn’t nearly as messy as submerging so I was liking this process.  By the third one, I looked at them and decided they were kind of dull with just white thread and they really did need glitter.  Somehow, snowflakes like this need a little glittery sparkle. So I broke my own rule.  I dug out the glitter.  This particular bottle is like a salt shaker and the holes are covered by cardboard inside so it doesn’t spill out when not in use.  I started sprinkling away with each one and it was all working pretty well.  And was pretty much contained in the cardboard box area with just shaking on what little is needed.  I finished all the snowflakes and was in the process of putting the cardboard block back in the shaker when I decided that the last snowflake needed just a little more sparkle.

I can’t really explain what happened next except that in my absentmindedness I knew that I was covering the holes of the shaker and that would have to be taken out again in order to get glitter.  I took off the lid again and started to sprinkle. In a flash I realized that I had taken the whole lid off, not the cardboard and in the process had dumped about half the bottle on this snowflake.  Gah!!!

“This is why I hate glitter! This is why we have a glitter–free zone house!!! How could I be so stupid?!!!” These are the thoughts that went through my head in the next flash of a second.  I must have uttered my dismay aloud because my husband asked me what was wrong.

“I just dumped a half a bottle of glitter on this snowflake.”
“How did you do that?", came my husband’s most logical response.
“Ummm, I was absentminded?”  I didn’t even try to explain what my brain had done or not done in this case.  It was all too much like an Alzheimer’s moment and I didn’t want him to point that out to me. 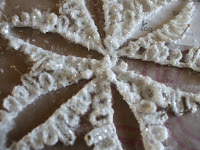 Have I mentioned that I hate glitter?  I thought at first the snowflake would just be extra glittery but after I had cleaned up what I could and shaken the rest off outside I could see that it looks like it has some furry fungus growing on it or something.

This past Christmas my Vegas loving friend gave my husband truffles.  They came in a red glittery box.  I choked back some laughter when I saw it thinking that this was the kind of thing that I would give her.  In seconds there was green and red glitter on my husband’s slacks and our friend’s couch which was a trick because the box was red glitter.  Inside the box some green glitter had permeated from who knows where so when my husband took out the truffles (which were quite delicious) it spread the green as well as the red glitter.

Was this revenge for all the glitter that I have sent to her house?  I don’t know but I put the glittery box in a sealed bag and stored it with the Christmas stuff cuz you know that my friend is getting her gift in that box next year.

Email ThisBlogThis!Share to TwitterShare to FacebookShare to Pinterest
Labels: Crafts

I am rolling on the floor. I guess I have a glitter free house more because I don't like bling than anything else, and probably why Alishka loves glitter. I have a feeling when she gets married it will be EVERYWHERE!

Still giggling over the "fungus"....