My Mom and Alzheimer's Disease 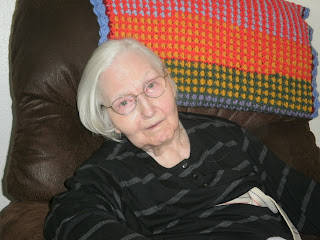 The mom I grew up with is long gone.  Her brain has deteriorated so much. Her body is crippled.  Still she has a sense of humor.  In some ways it is better now than it was before she became ill.  It warms my heart to see her smile because I get to glimpse her real personality for a second.  In that second, my real mom shines through.
Posted by Ria at Wednesday, September 14, 2011

thanks for sharing Maria. I needed to read this tonight. I'm struggling with my mother's Alzheimers as you know..... right now I'm thinking that my dad is the one that is deteriorating because of his time dedicated to her care. OH I want him to read this blog entry!

You are welcome to share it with him. I'm glad if it is helpful to someone. I like to read about your mom too. As I always say, "This disease stinks!"

Beautiful story! My mother inlaw is suffering from Alzheimer and I see the toll it takes on my husband since he is her primary care taker... She is divorced. My kids will never know her or how beautiful of a heart she had...I will pray for your mom as I pray for all the others with this disease that robs us our loved ones. Just sad....
Nancy