When we did a little remodeling on our house last summer we were able to FINALLY put new carpet in the house.  Good bye BYU-blue.
The carpet was in pretty decent shape when we moved into the house so we left it alone even though BYU-blue would not have been my first choice in carpet color.  A dozen years later, the carpet was no longer in good shape.  Actually it was not in good shape long before the 12 year mark but it took us that long to get the new carpet.

Anyway, when we got the new carpet we decided that we would permanently remove carpet from the stairs.  I was impressed with a blog entry I'd seen at southernhospitalityblog.com/the-down-dirty-on-the-stair-project and thought my stairs couldn't possibly be any worse than hers were to begin with so why not give it a shot.  Her transformation is pretty amazing. 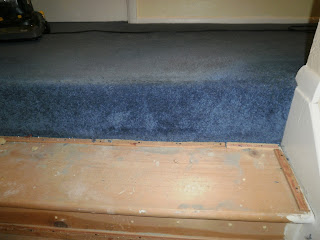 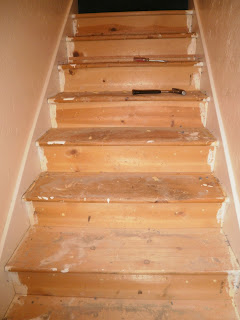 We ripped out the carpet, pulled up the nail tack strip thingys (technical term) and began to fill in irregularities in the wood, screw down the spots that creaked when we walked on them (which was pretty much everywhere.  I went through a lot of screws) and sanded like crazy. 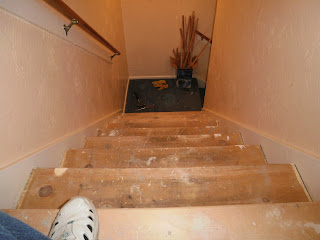 On a side note, that wall space you see on the landing there became a back door.  Can you believe that someone actually built a house with no back door?  Yeah, we thought that was weird. 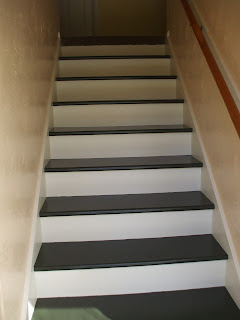 We caulked in around the edges of the stairs so there were no gaps.  Our house has many flaws including not being anywhere near plumb or level so some gaps were wider than others.

Once all the prep work was done, we primed everything and then painted the risers white and the tread a very dark green.  I actually had the paint store custom mix the paint.  I wanted it to be so dark green it was almost black but still green.  We used Sherwin Williams Porch & Floor Enamel. 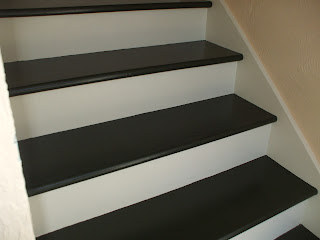 Painting stairs is tricky.  Our bedrooms and shower are all upstairs so we couldn't go a week without using the stairs very easily.  I ended up painting the right half one coat and then a couple days later painting the left side and back and forth until we got what we wanted.  I taped off the areas and put up signs to remind the family on which side they could walk.  I suppose it would have been easier to do the painting and send everyone on vacation but that wasn't a possibility.  The hardest part was keeping the cats out of the house since they wouldn't pay any attention to signs or taped off areas.  They weren't very happy with me that week. 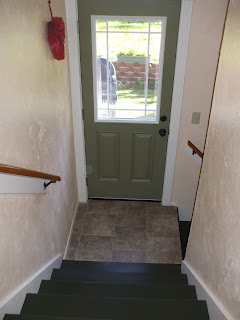 And since I mentioned it before, here is a picture of the back door that went in on the stair landing.  LOVING having that door.  It adds soooo much light to our otherwise dark house.  You can see the retaining wall my husband put in.  Landscaping is a work in progress out there....

I'll note also that we put tile in on the landing.  That was not the original plan but when the carpet came out we discovered that the landing was made from particle board.  Not a great idea for an entry since it soaks up water and warps so easily.  So we tiled instead. 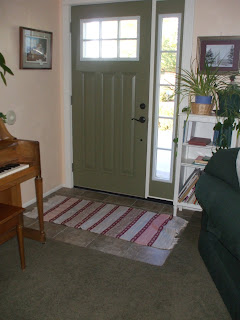 And since I'm showing off the back door, I might as well show the new front door too.  We added the side light window and choose a door with some window, again to add light to our house.  LOVE IT!  Some time perhaps I'll do a post on the storm doors we chose.  We get so many compliments on both the storm door and the door.   Very happy with the choice. 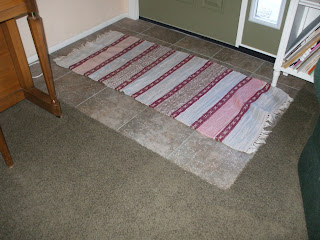 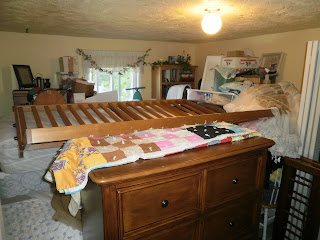 And here is a shot of the front entry which we tiled (it was all carpet before) and that new carpet.  The throw rug is a vintage Swedish woven rug my mother brought over from Sweden.


And just for amusement, this is what our bedroom looked like when we were moving things to get the carpet in the other bedrooms. The other direction was filled to capacity.  And I'll give a shout out to my brother who was a good sport about helping to move everything.

Oh my goodness! I love everything! I can't wait to come up and see it in person. You did so much work and it looks like it was totally worth it!

Wow! I can't believe how much you've done since I saw it last. I LOVE the painted stairs. And the back door....so great!

Thanks guys. We are enjoying the changes!