When we had this house inspected before finalizing the purchase, the inspector told us that the kitchen cabinets were pretty worn, as in needing to be replaced.  That was 13 years ago and we haven't replaced them.  I've mentioned in previous posts, how dark this house is.  Seriously lacking in natural light. And the cabinets were a very dark brown which assisted in giving the kitchen a cave-like feel. Sorry, no picture. 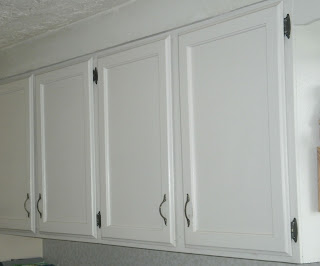 We decided to paint them first off.  We choose an off white with pink undertones called Apple Peel.  It was okay and did succeed in lighting up the room a bit.

There was a wall border above the cabinets that I'm guessing was put up in the 80's. The colors in it were the pink and blue that were in when we got married in 1987. Unfortunately, I could not find a picture that showed the border.
As one might imagine with painted cabinets that get daily use, eventually the paint gets chipped and doesn't look so good anymore.  Early on, I did touch up on the paint but after some years I just let it go hoping that the beat up look would just make the whole thing look "vintage".  It didn't.  Pretty much it just looked beat up. And I found that in some places, like above the stove, the paint had actually worn through from cleaning the grease off the doors.

What I really wanted to do was completely redo my kitchen but that was not in the budget.  My next choice was to replace the center sections of the cabinets with bead board but having it professionally done was also beyond my budget and I was chicken to do it myself.  I don't have the experience with power tools and really didn't want to try my hand with this project.  So I stewed about it for a long time until I saw this on Southern Hospitality. (Yes, same gal that inspired my painted stairs).  Paintable bead board wallpaper.  Genius! Rhoda sells it on line but I actually bought mine from Home Depot.  (Sorry Rhoda). 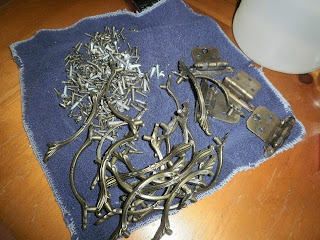 So getting down to business... First I took off all the hardware as I removed the doors.  I soaked them in vinegar and cleaned them up as well. A lot of years of gunk built up on them.  Replacing them for newer hardware was not in the budget either. 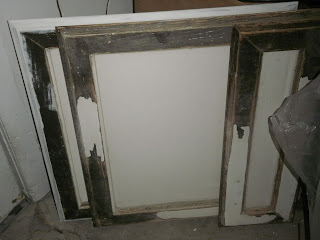 Next was the tedious process of preparing the wood.  I started off using a paint remover but soon decided that was harder, messier and still required sanding after the fact so in the end I switched to sanding the chipped paint off.  I found on some doors I was able to just sand off sections leaving other parts in tact and smooth but most of the doors required complete paint removal.  This whole process took a lot longer than I anticipated.  As a matter of fact, I started this project when my husband went out of town for four days.  I thought I could get it done and have my mess cleaned up before he got back.  HA!  The joke was on me.  It took three weeks to get through all this (and truthfully, I still have some touch up painting to do). Hey, I just realized that this picture shows the original dark stain.  :) 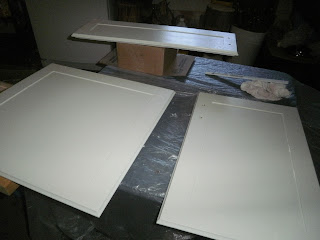 I spread out the doors in the garage and then traded off working on the doors or inside on the cabinets as one or the other dried.

First I primed everything. And then I painted.  I choose a green shade that I thought would be fun but when I put it on the cabinet I realized that I hated it and my husband would REALLY hate it when he got home. He was already skeptical of this whole project.  Darn it.  That is what I get for not buying a quart first to see if I liked it but I was trying to cut costs.  Hmmmm.  I took it back to the paint store hoping that we could add color to it to make it more of what I wanted.  It was only at the store that I realized that the paint she had mixed for me was high gloss and I had not wanted high gloss.  Lucky mistake for me!  That meant she had to mix it over again and I could get a different color this time.  Yay!  And since the paint I had originally bought didn't come in a semi-gloss, they actually had to upgrade the paint too.  I was feeling pretty good about the store mistake.  Sorry for them, but very lucky for me.  In the end the paint I chose was called Liveable Green from Sherwin Williams. 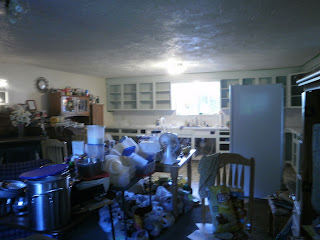 Here is a lovely shot of all the contents of the kitchen dumped into the family room.  Yeah, we were in a mess for a while.  And you get a peek at the paint color too. 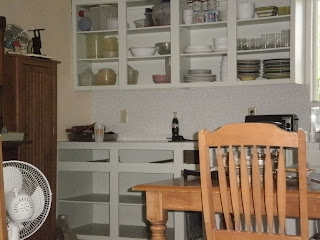 Things only improved as I got all the painting done in the cabinets and could start to put things away even though the doors weren't finished.

I could have sworn that I took pictures of the wall paper process but it appears that I did not.  The bead board paintable wall paper comes in a pre-glued roll so you just cut off the amount you want, soak it in water as instructed to activate the glue and put it in place.  It is super easy (as long as you measure correctly). I did learn that the paper expanded some from side to side so even though I cut it to the exact measurement, the paper was always too wide after it was wet.  Not to worry though. Either cut off the excess or do as I did and learn to anticipate the expansion when you cut.  The wider the piece the more expansion.  A narrow piece doesn't expand very much.  The part that takes the longest with this process is that you have to wait 24 hours before you can paint the paper.  But I did the doors in shifts again so while I waited for the paper to cure, I sanded,primed or painted other doors. 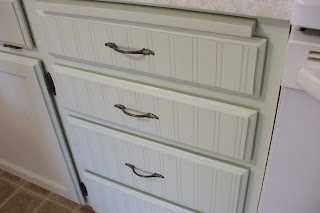 Since I don't have any pictures of the wall papering, I'll have to skip right to the finished product.  Here is my new bead board kitchen. 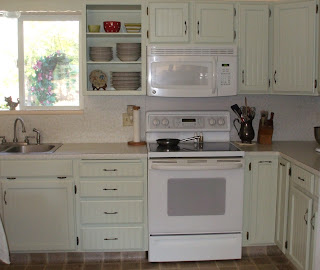 And for added interest, I did not put all the cabinets doors back on.  I left one off on either side of the sink and I love it. 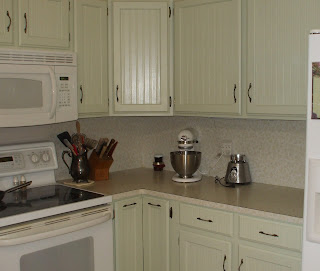 So the whole process was time consuming but it wasn't hard.  The one worry I have is how well will the wallpaper hold up.  The paper is dimensional and kind of a foam substance so if you poke something in it, it leaves an indentation.  If I had young kids at home, I don't think I would put this in a kitchen where it takes a lot of banging around.  Although, so far, every ding the wallpaper has gotten has healed itself so maybe it isn't a big deal.  Time will tell.  In any case, I am loving the new look. It really does look like wood and it was an inexpensive way to makeover the cabinets.  The cost of the wall paper was about $25, plus the paint.  Way cheaper than new cabinets...


I'm linking up with Frugal Friday at The Shabby Nest

WOW! I LOVE the way it looks!!! I totally know the hard work of sanding though. I sanded down 4 kitchen chairs to get off a few layers of poly and stain - I thought I could work on them during a few nap times and be done! BOY oh BOY was I wrong!!! You did and awesome job!!

I really liked the cave-like feel...

I'm curious as to how the new cupboards hold up when washed. It sure looks great. I love it.

So far it holds up great. They wash just like paint on any surface. We'll see how they do in the long term.

Wow, paper who would of thought? Looks incredible!

Okay, so now that it's been more than a year... how are they HOLDING UP?

are yours doing well??? Would you do it agian?

I'm planning the SAME project for my kitchen and am still deciding whetehr to use the beadboard sheets from homedepot or the wallpaper (which would be SO MUch easier!!!!)

If you have children in your home I would NOT recommend using the wallpaper in the kitchen as it is fragile and dings pretty easily.

The cabinets still look good because the handles are on the wood instead of the wallpaper but with the drawers it is super easy to catch a fingernail or something and ding it up. At first we were really careful but after some months we kinda got careless so the most used drawers don't look so good.

I would in fact do it again however. I still have plenty of paper left in my roll and can easily replace the paper on the drawers. I plan to do that when it is warm again since I will need to do it in the garage.

If money hadn't been a consideration I would definitely have chosen to put real bead board in but with money being tight it was a very inexpensive way to get a whole new look. I knew when I did it that it wouldn't last for years and years but figured it was a good way to look nice until we could afford to do the real thing.

I'm really happy that we did it and have gotten many compliments on it when people come into our home. And NOBODY realizes it is paper unless we tell them.